The Hotel Belle Epoque is located in the heart of Venice in Cannaregio. It is close to the Santa Lucia railway station, the Grand Canal, and the Rialto Bridge. It is situated at number 17, Rio de Lista di Spagna.

The district takes its name from the Cannaregio Canal which is the main entrance to the city from land. Various attractions can be foudn in the district including: the Jewish Ghetto, the churches of Santa Maria dei Miracoli, Sant’Alvise and the Santa Maria Assunta, the palazzo Ca’ d’Oro (Golden House) - considered one of the most beautiful palazzos on the Grand Canal, the baroque Palazzo Labia and the Isola di San Michele cemetery island which is also associated with the district.

Only 25 minutes walk or water boat journey away Piazza San Marco or St Mark’s Square is considered one of the finest in Europe. The piazza is home to St Mark’s basilica and is very popular with tourists, photographers and pigeons. It is one of the few large urban spaces where motorized traffic will not be heard. This is the only square called a piazza (the standard Italian word) in Venice, all the rest are called campi which comes from the Venetian dialect. The Piazza is overshadowed by the Basilica, the Doge's Palace and the Basilica's campanile (bell tower), which stands separate from the main basilica.

HOW TO REACH US 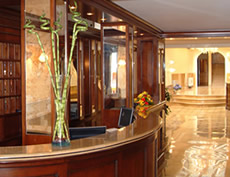 From the Airport : The quickest way to reach the hotel is by private taxi. Alternatively a water bus can take guests as far as Santa Lucia train station. Take bus number 05 or ATVO buses.

By Train : Santa Lucia is the nearest railway station from which the hotel is a short stroll. On exiting the station, turn left and take the Rio de Lista de Spagna. The hotel is located at number 127/128 on the left facing the Grand Canal.

The best place to leave your car is Piazzale Roma. From here you can take the water bus.

Line number 1 or 82 runs to the train station. The hotel can also be reached by foot.